My colour scheme  is equivalent to the 12 tone musical scale. This is divided primary in to its name sake of 12 equal parts, any interval can be defined in terms of an appropriate colour terms. This can be achieved by  the loose use of color bias wheel ,( as describe by Michael Wilcox in his book, Blue And Yellow Don’t Make Green, this is the first step.)– annotation

The second step is the most important, because its where the final outcome is arrived at. This important step is called INTERPRITATION,  the creative part. It is our own interpretation that makes us stand apart. As we are all individuals, we are meant to think independently.  then  a style of interpretation should be for each one of us. Then, one may ask, why it isn’t so?

Art is the result of some thinking,  the interesting part is what typed of thinking or thinking(s) ?  The why and how , and how it is presented is just as important. Ideas change, values change,  as history can testify. We are in a century of mobile ideas, and so there will be more changes at a more accelerated pace.

Parallels thinking  this is how I visualize the use of colour in my eco system.

One way of describing my methodology is akin to  traffic thinking, traveling in parallel lines.  Its orderly and sometimes not so orderly fashion.  There are rules, but we  push beyond.

When I came to create my musical notation system, the first thing that I developed was a musical colour equivalent scheme which is based on the colour wheel. It is meant to function in general as the traditional music notation system.

Tradition notation served us well, but is it the only system? Could it be that  out there, there is something better, and more appropriate to todays needs? A type of notation that can be hand notated with more scope of holding data per character and versatile? Yet, when developed has the potential to be electronically more efficient and encompassing?

Some of the reasons for creating this are.

As a guide to visualize a musical notes, and to give the notes a sense of the basic elements of dynamic visual design.

To help quickly with familiarizing, remembering, and reinforcing the new musical symbols.

The color scheme is not meant to be a scientific model, as there are other more efficient means to do so. It is mean it to be, a general open idea, a plan to a means.

At some point, I will give a brief description of the notation which can also be found in my paintings. At the moment I’m committed to other numerous art projects. 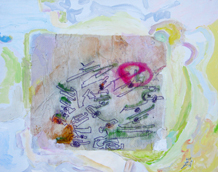